I've been spending the last year working (off-and-on) on some changes to Grafx2!

Grafx2, for anyone not aware of it, is an old piece of pixel art software from the 90s, for doing 256 color art. It closely mimics Deluxe Paint, for those familiar with it.

There are a few weird aspects of the UI (attributable to the fact that it's from the 90s), but the biggest issue I have with it is the limited ability to pan around the image. As of this writing, Grafx2 doesn't let you move the visible area in a way that would let you center the upper-left corner of the image. You can't pan further to the left than the point where the left edge touches the left side of the screen (or window). Similarly for the top edge and vertical panning. 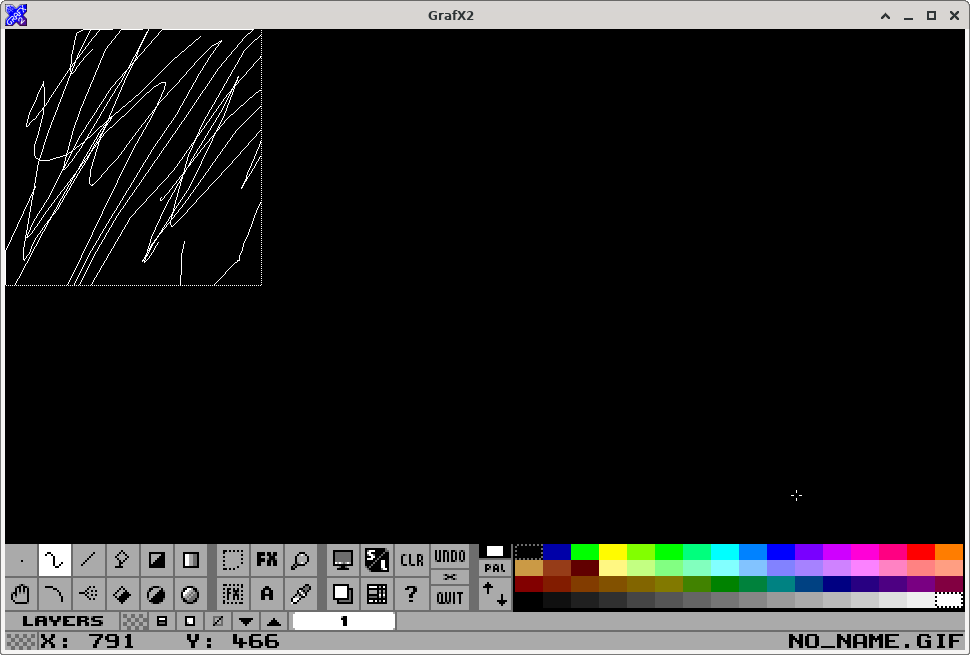 Thankfully, Grafx2 is also open-source! So I figured "oh! Why don't I just go in and fix that?"

The result was a lot more work than I bargained for. But it's finally starting to show results. You can now pan the image around a lot more freely in Grafx2! 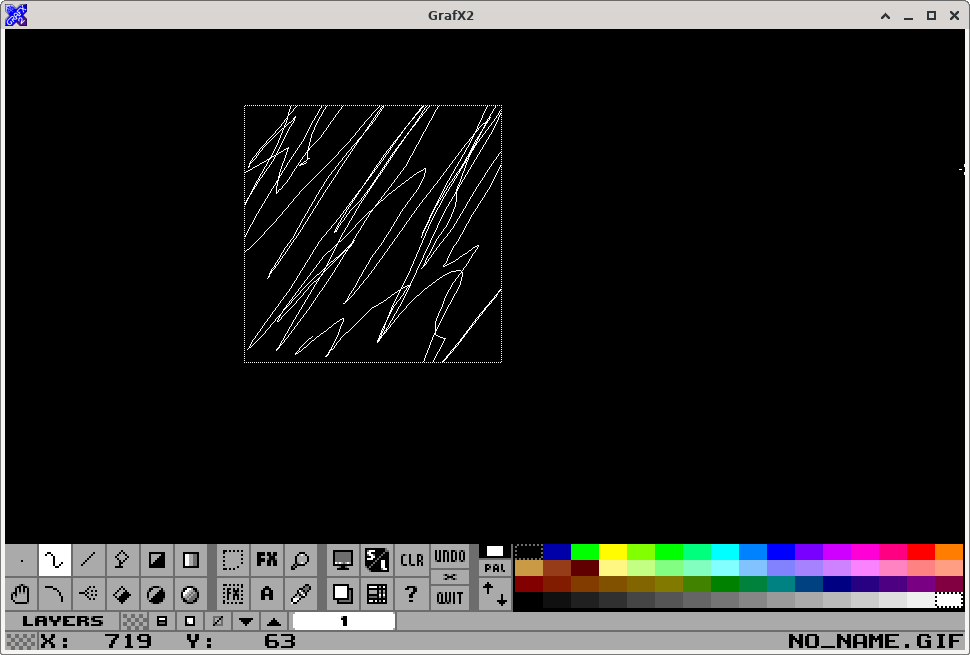 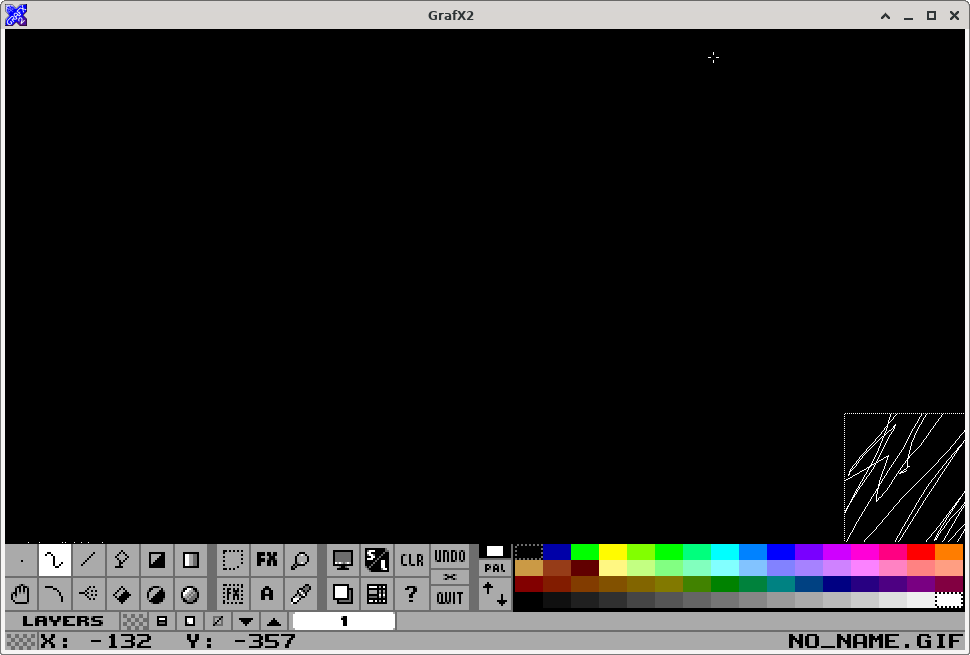 I have a branch that, while the code is SUPER MESSY and spills out a ton of warnings, it's still functional. Almost everything works (except one of the many pixel scaling modes, as of this writing).

My current "panning" branch is available right here. Feel free to give it a whirl! Please, please, please let me know if you find any bugs specific to the panning branch!

This change touches a LOT of code.

The code is extremely messy at the moment, and needs a ton of cleanup, but everything is currently working. At least, on PC.

So I watched Mark Ferrari's entire GDC talk "8 Bit & '8 Bitish' Graphics-Outside the Box". It's a fantastic talk by one of the greatest pixel artists alive today. He talks about a lot of his work, and spends a section of the video going into some details about his techniques.

I tried to follow along as best I could in his tutorial sections using Grafx2. Unfortunately, there are a few things that Deluxe Paint and/or Pro Motion can do that Grafx2 still can't. One of those things I'd really like to use is Deluxe Paint's gradient fill modes.

So I've been trying to dissect the way Deluxe Paint does its shape-conforming gradient fills, and seeing if I can implement them myself in Grafx2. (Grafx2 also a has an existing feature request that mentions this functionality: Add more flexible gradients)

Here's what I'm up against: 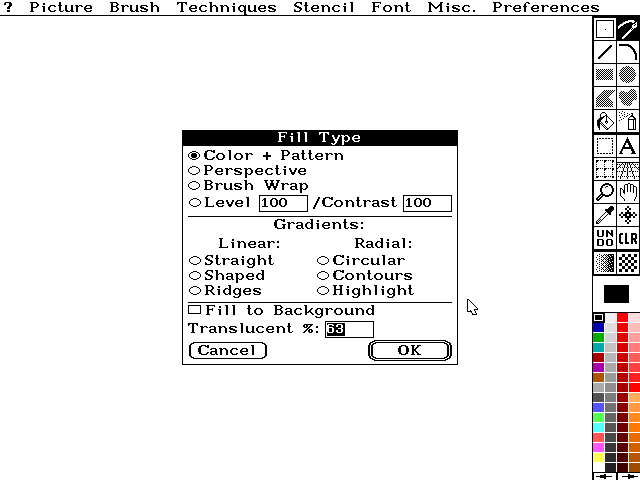 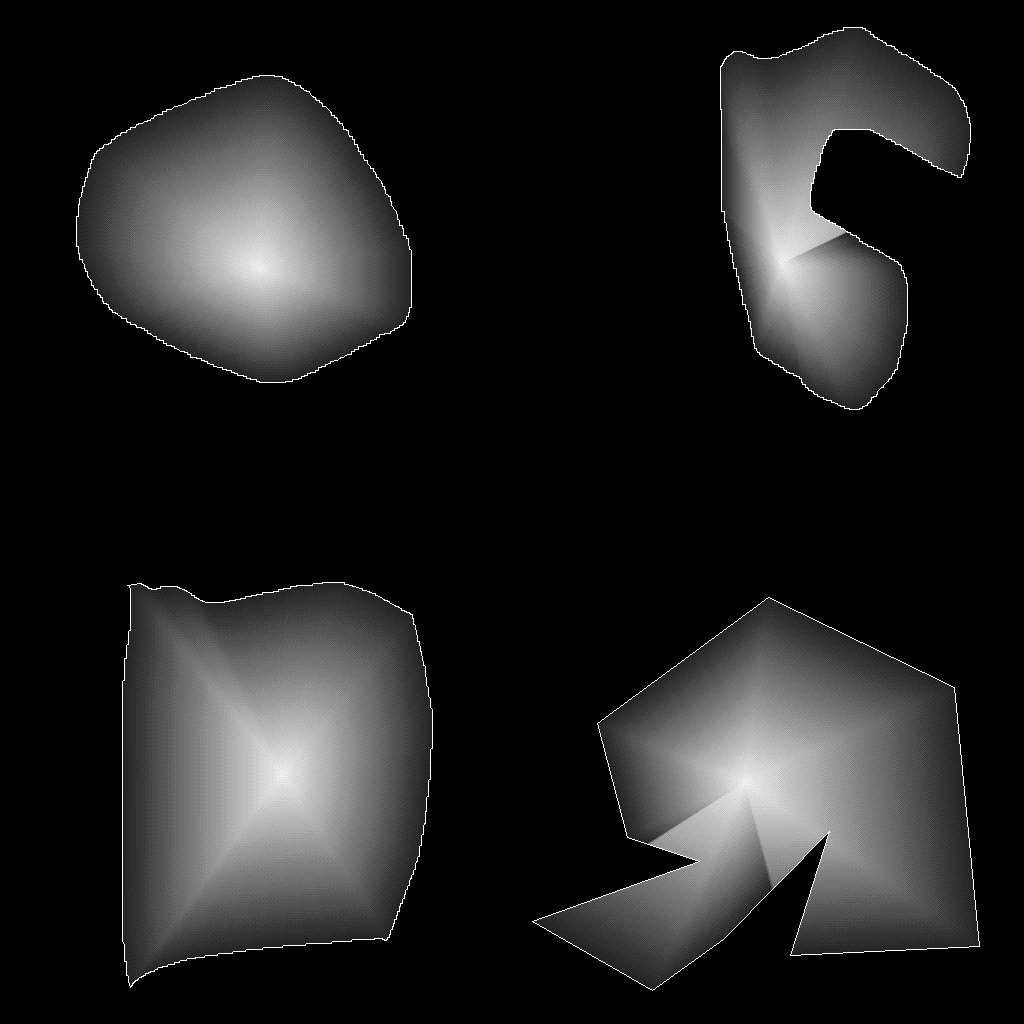 The key here to replicating some of DP's odd behavior is that it's always using the most distant edge. This is why DP's fills look a little weird when the fill wraps around curves (where it has multiple edges to choose from along some lines coming from the center.

From our top-right example, we can see how this breaks down. The gradient is being done based on the most distant edge, so it's affected by the hook shape. 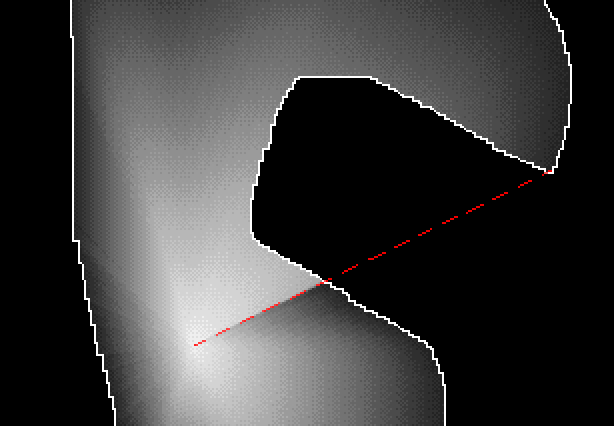 And the bottom-right example. We can clearly see where it's preferring far edges to interpolate to. 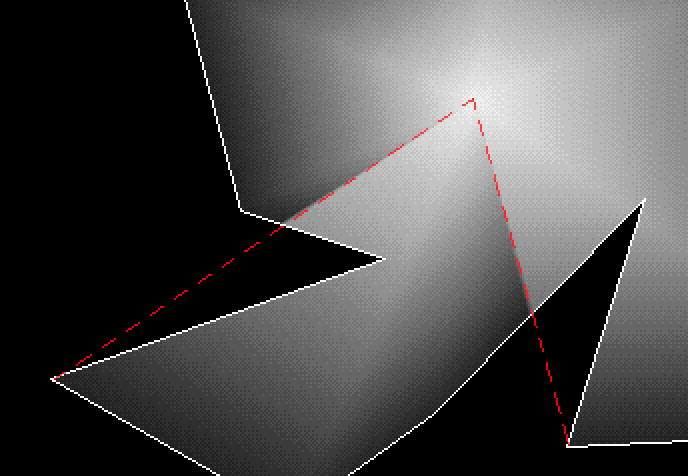 I believe this is identical to "Countour", but with a different mapping to the actual gradient. t may be affected by a curve, similar to a gamma curve. So I'm not going to cover this one here. 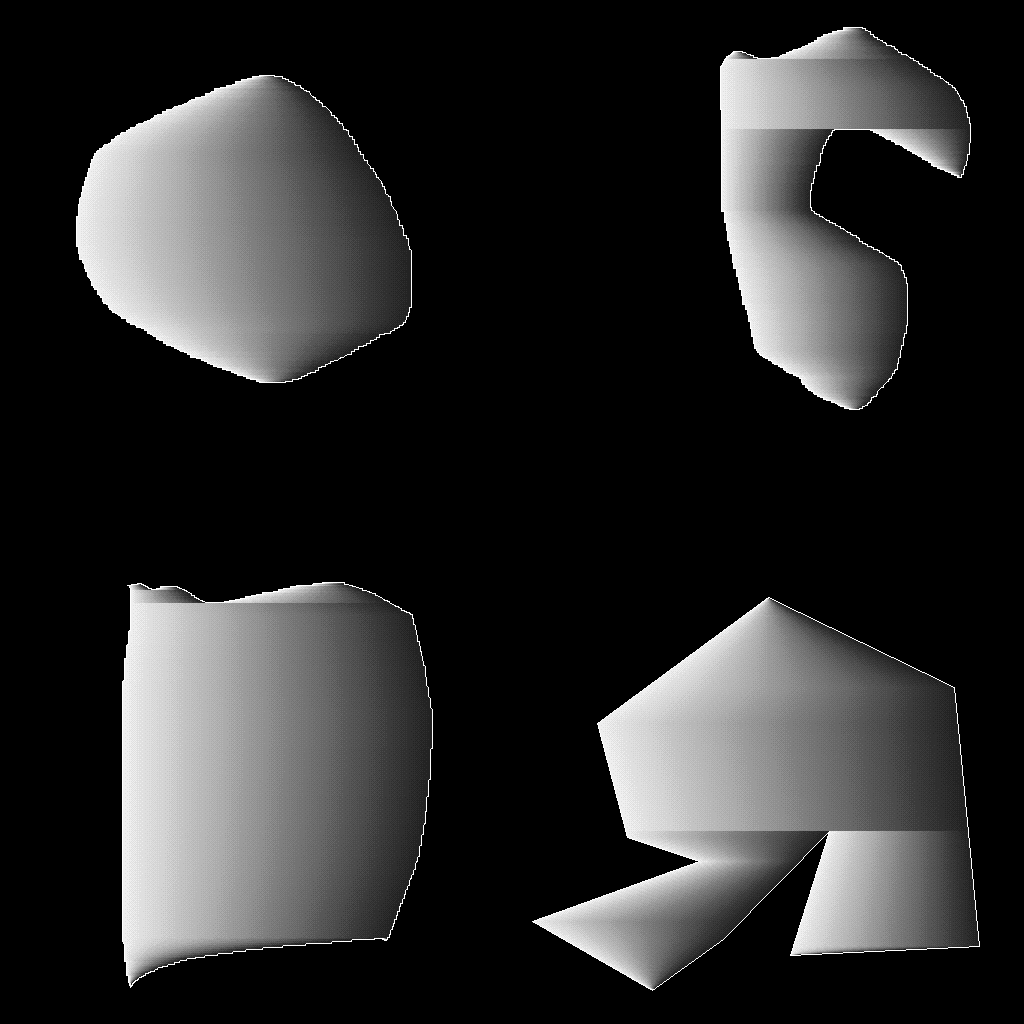 This is a pretty basic linear gradient fill. Grafx2 already supports this, so it's only here for completeness.

This is a basic radial gradient. Grafx2 already does this, too, so we won't get into it. 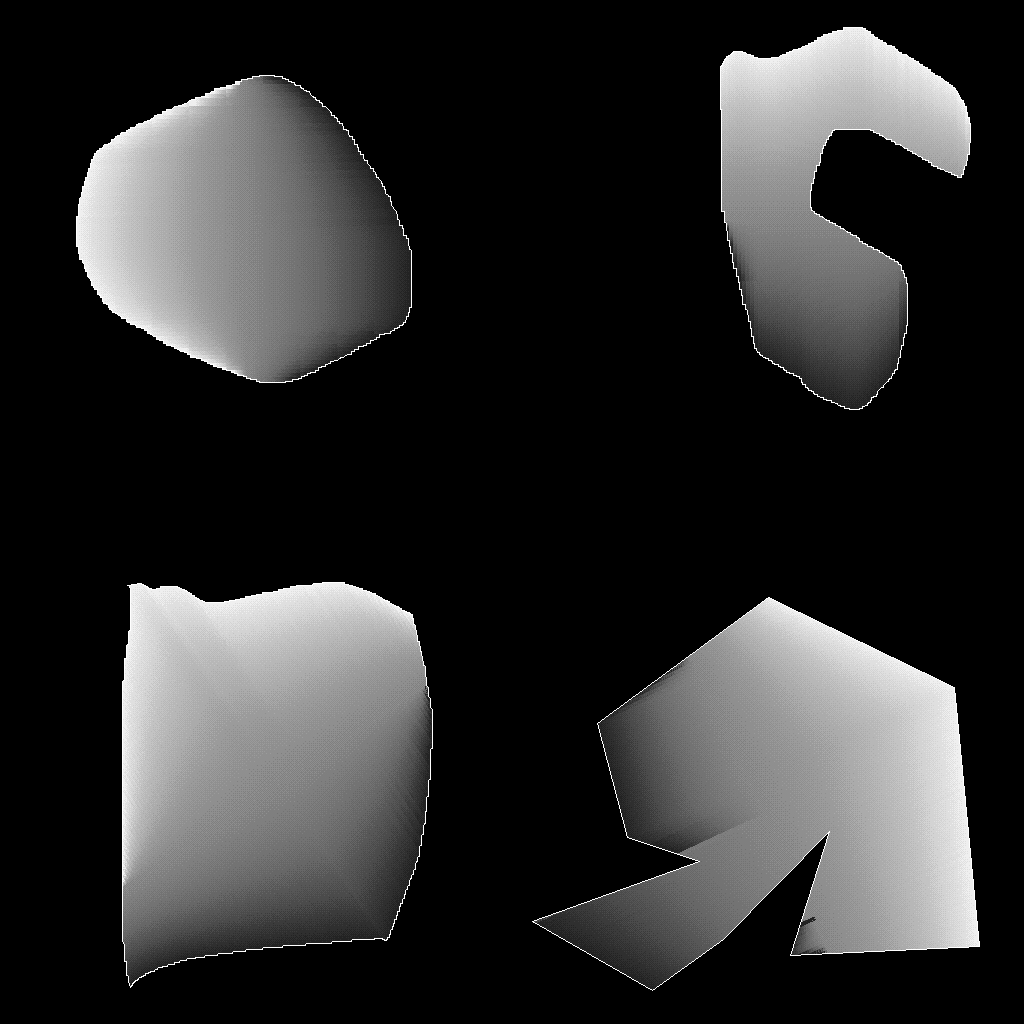 This one is like the "contour" fill, except that it uses a line instead of a single centerpoint. We'll do the same math as before, but with an extra projection. Rather than a single mid-point, as used in the "contour" mode, we need to use an entire line. 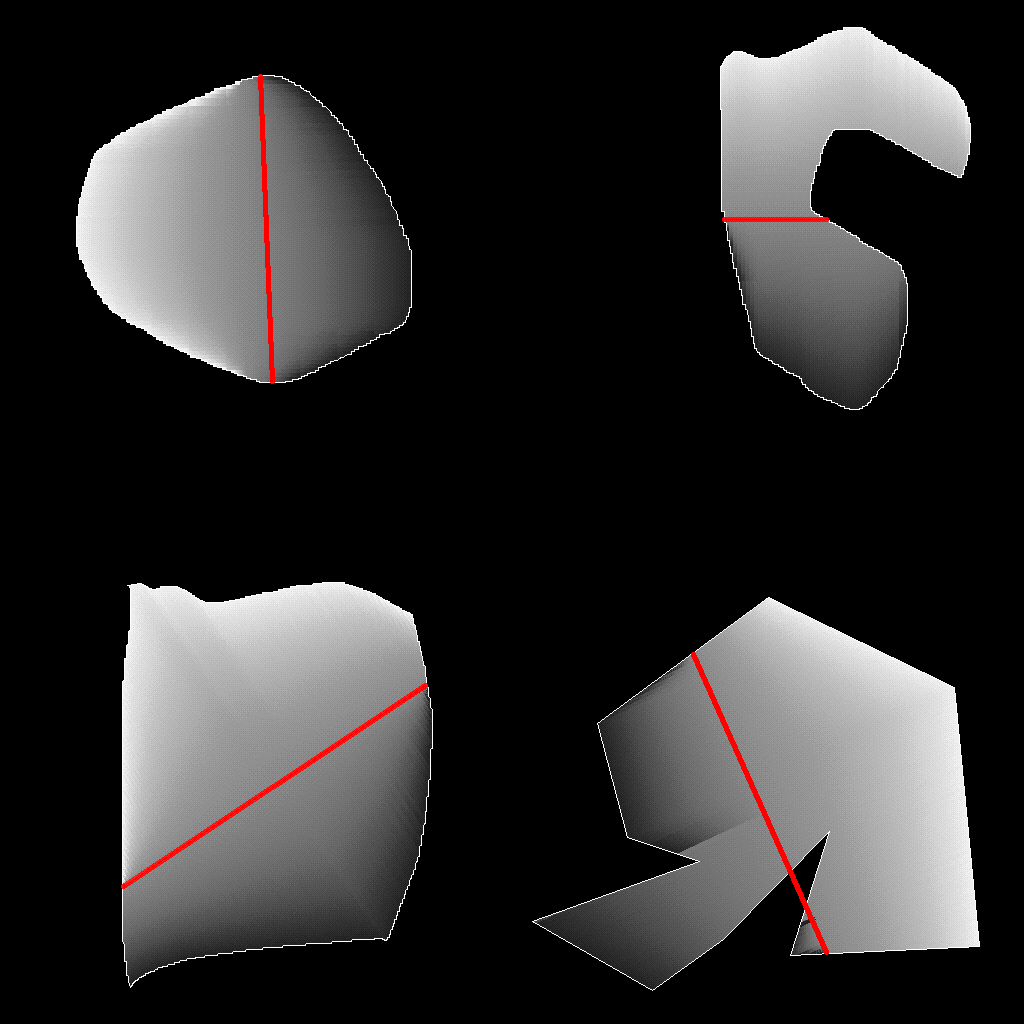 It'll work exactly the same as the contour gradient, except that we need to find the closest point along a given center line, and use that as the A vector in the equation.

So far I've only worked on figuring out the "contour" fill mode. My results are looking pretty promising, though! Here's what my prototype spits out with the same image input (slightly different points selected as centers): 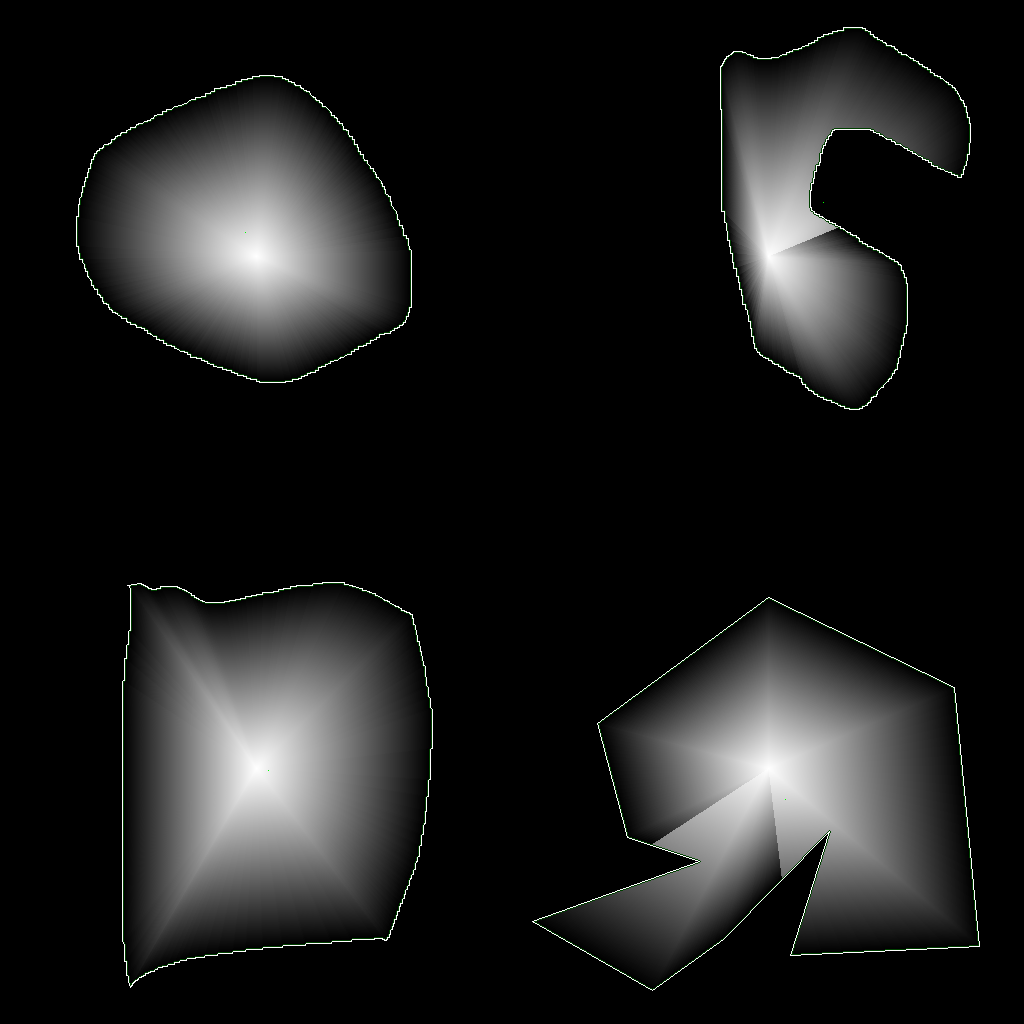 It doesn't match the DP results exactly, but that's more a matter of correctly mapping the gradient to color values than anything to do with the technique.

Next update will probably focus on the "shaped" mode and optimizations.

So quite a while ago I started building a scripting language and, over the course of about a year, actually finished it (for some definitions of "finished"). The scripting language was named "Ninkasi", after the Sumerian beer goddess.

Years later, as part of a job interview, the company I was applying to wanted me to do a presentation to the programming team. The presentation could be whatever I wanted it to be, so I picked the one thing I'm more familiar with than anyone else, more complex than most stuff I've worked on, has well-defined goals, and is a project that I actually finished, and that was my scripting language.

I've gone ahead and transcribed the slides I made from that presentation here, for anyone interested in the inner workings or development of it.

It's a project I'm still damn proud of, even if there are a few things I'd do differently if I did it again, and I cover those things near the end of the presentation.

Original slides are available here, created on Aug 8th, 2020: Google Slides deck. (Going forward, any updates are going to happen on this article, so the slides may be outdated.)

The scripting language source itself is available here:

The preprocessor is available here:

I made a scripting language and now you have to hear me talk about it.

2. Why on Earth would you do something like that?

I spent years on this so I better make this answer good.

5. Even more features I wanted

6. Features I wanted, last one

7. Okay I lied. This is the most important one

Wasn’t part of the original reasoning but I like it anyway!

What the heck does this thing even look like?

This is an extremely simple program that creates a VM, hooks up an output function, compiles a one-line hard-coded script, executes it, and cleans up. Error reporting is minimal.

Here's a simple example of Ninkasi script code. It generates a Mandelbrot pattern (using numbers instead of colors), and prints it to the console.

For this script to work, it would need a "print" function created, just like above in the C API example. ("print" is not a build-in function.)

What to do when everything explodes so you don’t HCF for real.

Or how I learned to stop worrying and wrote a C89 preprocessor from scratch.

26. I wrote a C89 preprocessor from scratch.

There’s no assembler so if you want to go lower-level you get to do it the hard fun way.

44. “Closures” handled in a mediocre way

Also, I'm counting this as my official first Gruedorf entry.

It's a bit coincidental, because I didn't realize it had been going until right before I decided to publish it (and also, hopefully, have it be the start of me blogging regularly again).